Hey, I finished my animatronic robot owl and I got her a name: Luna. It’s so much fun when characters from my stories come to life. I used 4 servo’s and a very programming-frendly Pololu controller to make her move. This is just one of the marketing ways of promoting my Project Dizary during festivals and fairs. Let me tell you how I created her, after this lovely video of the end result.

Start
Fist of all I searched the internet for owl examples. I’ts was my fist attempt in creating an owl, so I had no Idea how to model her. Or even had any idea that it would become a great design. I just started and found out along the creative process how she was going to look. Then I started to figure out what parts I would need. I created a crow before so I knew what parts were necessary. Here is a list.

The frame
I used a small piece of plywood to make a basis for the body and to glue the servo’s onto. Made a plastic ring on the top to mount the wings and for fixing the outer body parts later on. The couple/hinge of the wings is just a small piece of Eva foam, nothing heavy. Then I fixed the servo’s in place with hot glue and made small rods to move the wings and to tilt the bird forwards and backwards. The 3rd servo I used horizontally to move the head left and right.

Head and eyes
The head was made out of a standard transparent polystyrene christmas ball. Use e Dremel to cut holes for the eyes. And use the other side of the ball to make the eyes and eyelids. I painted the head black so there would be no background light shining through around the eyes. The movement of the eyelid is very complex and I had to try this several times. I made a video when the ball was still transparent so you can see the movement.

Decoration
The wings is just sticking white furry textile and feathers on the plastic amrs. The body is made out of two small pieces of dome-formed chicken wire and fur. You don’t want make it to heavy. After that I airbrushed the fur because it was way to white.

I found some old keys at a secondhand store and I used them for the owl to guard. Fixed the keys on the book with hot glue and painted them a bit darker to get good contrast with the yellow/brown claws. I used simple clay to make the claws and nails. Nails I made separate and use wood glue to stick them onto the claws. The legs are perfect to hide the wires that power the servo’s and program the Pololu.

I wanted the Owl to sit on a book as a keeper of keys to wisdom. I got an old second hand book, opened it and this was the first image I saw! Can’t be a coincidence right?

The book is perfect for hiding the USB cable and the powerbank. Here I used a 10000mAh 5V, 2,1A powerbank because this animatronic has to move for 2 days in a row without rest during the fantasy fairs, on which I sell my books on.

There is some improvement to be done on this first attempt. But Luna looks great already. I’m thinking about adding some Steampunk costume elements…hmm. I think I can work on the movement, perhaps a bit slower and diverse. I’m going to try to make this into a DIY set, so you can make one yourself. But first I have to go back to writing my next novel (sorry, only in Dutch, for now). 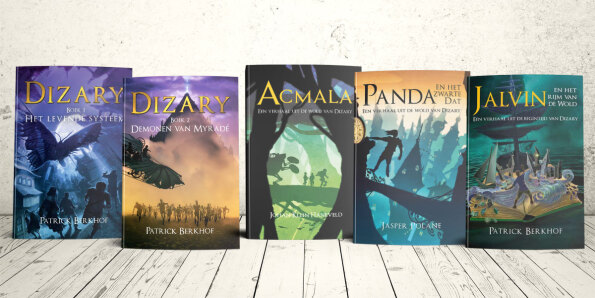